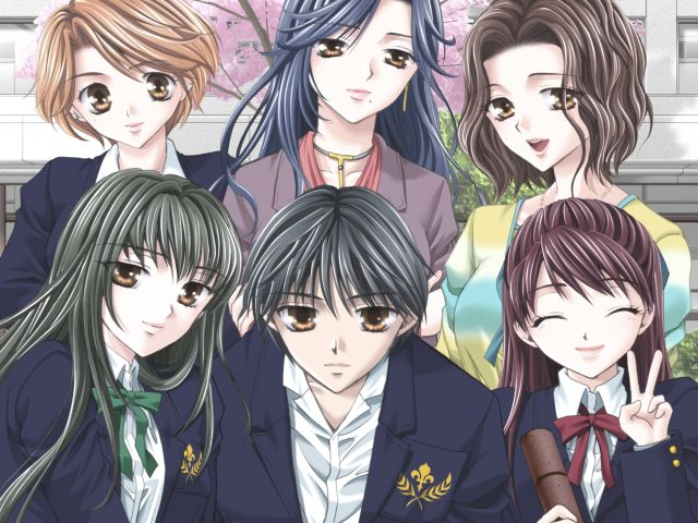 I will not waste your time here and start by saying that I unabashedly loved this game from start to finish, and I am confident that most everyone who gives it a shot will walk away with something meaningful to remember it by – regardless of how good or bad or traumatic or meaningless their high school experience was. As of yet I haven’t been able to find anything else that captures this particular snapshot of YOUTH so perfectly, and it is certainly no mystery why so many eroge fans consider it a timeless classic. Minakami, come back to us!

I figure the best place to start discussing this game is likely with its unique premise. In stark contrast to most modern charage with a school setting, Crescendo opts to remove almost all of the typical daily life segments and focuses on the (incredibly relateable) main character Ryou and the people he is close to going through their final 5 days of high school before graduation. This leaves no time at all to meander in the quagmire of lunch food descriptions, faux-lectures, or other such trifling details that an eroge fan from 2017 would expect in this sort of game. Normally, a character focused story of this kind taking place in such a short period of time would run the risk of coming off as entirely too short, lacking substance, perhaps simply 物足りない , but Minakami does an exceptional job of making everyone feel full and developed by way of clever characterization, powerful writing, and meaningful dialogue.

As high school seniors near graduation so often do, the cast tends to think back on the time they’ve spent together quite often and as such their backstories are largely told through the traversing of their memories. I’ll be honest and reveal that I generally have a hard time with eroge that employ a large number of flashbacks, and for good reason! Many authors utilize these very poorly and they wind up being more effective at destroying the pacing of the main story and feeling irrelevant than conveying information, or anything else for that matter. Thankfully, Minakami avoids that trap and this technique definitely ends up as an overwhelmingly positive addition; he understands how to pace these scenes and seamlessly weaves them into the overarching narrative so that they don’t feel intrusive. There are maybe just a few too many of them, but it doesn’t hurt the game since they are short, sweet and most notably do an excellent job of amplifying the ~sentimental reminiscence~ vibe the game has going on, complimenting the structure nicely.

Speaking of short and sweet, since time is just about out for their high school careers (and for the story itself) every scene has to count and hardly anything in the game can be called filler. For example, after only the first in game day it manages to establish a variety of complex character relationships and builds upon them just as expeditiously as you enter their routes. Along with Minakami’s knack for hitting all the right notes with characterization, his text in and of itself is definitely some of the better eroge writing I’ve come across. Strong, vibrant, immersive narration effortlessly builds a well defined atmosphere and allows him to frame events in such a way that they stick in your head and force you to get involved with what’s happening. This type of writing also comes with the added benefit of putting the reader so far in The Zone that they are left vulnerable when things rise to a fever pitch, making for a number of truly powerful moments of catharsis.

On that note, the drama and conflict in the game is actually very well done and this is doubly true when looking at how dicey some of the subject matter is. I get the feeling that a great deal of the things addressed in Crescendo would come off as heavy-handed or even cheap were a lesser writer trying to tackle the things Minakami goes for here, but I honestly didn’t feel very much 違和感 with any of it thanks to how relatively respectful and realistic he kept everything. I actually commend him for exploring some of this stuff since it’s just… not touched at all in many eroge I’ve read. Like, I have to wonder how many commercial character focused games in the last decade have had a major heroine like Yuka (a prostitute with serious emotional trauma), for example. I don’t know for sure and perhaps I’m just not looking in the right places, but my guess is probably not very many!  You simply don’t see characters like her being treated seriously or even mentioned in the medium very often, which is a real shame since Minakami proved here that this kind of thing can be done both gracefully and effectively.

Of course, that isn’t to say that every route needs to have some heartbreaking backstory to be Good. In fact, one of the things that puts Crescendo apart from the rest of the herd is how satisfying and unique each of its 5 main routes are. Every heroine has a solid character arc, the romantic development progresses naturally, and perhaps most importantly every route feels meaningful far beyond just “and they lived happily ever after”. Looking back there isn’t exactly a true route, and you are actually more or less free to pick which end you like best as canon – they are all that strong. However, I will say that Kaho and Kyouko’s routes felt very much like intro routes to me and while I found them both engaging and enjoyed them greatly for the love… rectangles? they are, I think the game 化けるs into something much different once you clear those.

Like I said earlier, Yuka’s is one of the more ballsy eroge routes I’ve read to date, and I was very surprised with how heavily invested I was with her character arc considering I expected to hate her. Kaori and Ayame are likely the two best 年上 routes I’ve ever read, both for different reasons that are exceptionally difficult to talk about in a public forum (I tried, trust me) while avoiding spoilers so I’ll leave it at “they’re great”, and say that each does an amazing job at exploring some exceptionally difficult content.

As an aside, I found myself more engaged with the latter parts of Ayame’s route than most things in recent memory and it’s definitely the highlight of the game for me. Let’s just say that I can see why Romeo and Minakami are bros now… that dialogue in the climax, Jesus Christ.

Now I’ve been gushing on this game for far too many words, but Crescendo is not perfect and I do have some problems with it. The biggest of which is probably the final hidden route, I am still scratching my head on that one. While I did enjoy it for what it was and I can sort of see what he was going for with it, the supernatural elements simply don’t fit with the rest of the game’s realism at all and when looked at as a whole I would even go so far as to say that its presence detracts from the experience in some aspects. Another big problem is the cast becomes somewhat strange in terms of characterization if you take all the backstory in the routes as canon – Ryou’s character in particular gets real fucked up real fast this way. What I personally did was just take each route as a separate story with its own past and assumed each had common points in the present day, which I would imagine is how it was intended to be read in the first place, but even like that it still comes off as somewhat disjointed for lack of a better word. At any rate, given how solid this game is as a whole and how vividly it has stuck with me, my complaints are nothing serious and clearly don’t impact the experience in a significant way.

To close this out, as I mentioned earlier Crescendo is kind of an anomaly when looking at it from a modern eroge player’s perspective and I loved that it betrayed my expectations in such a positive way and managed to feel fresh despite being 16 years old. I went in expecting to perhaps see some early versions of charage tropes done well and just call it a day, but Minakami went for something completely different that ended up leaving a mark on me.

There aren’t any scenes eating lunch with the bishoujo of your choice on the school rooftop. There isn’t a chance for the reader to slowly get to know the heroines through their daily routines or various personal quirks in class. There aren’t any school festivals or shitty played out bullying subplots or evil teachers or club activities, all of that has simply already come to a close. As readers, we walk into the middle of an impossibly raw section of the cast’s lives and take a front row seat to witness a set of relationships that are in their final hour; a whirlwind of feelings that have finally taken on a concrete shape with too little time left to be properly expressed, and we get to watch as it all builds up into a crescendo of youthful indiscretion and emotional fireworks.

And boy, it is some powerful shit. Check the game out, if nothing else I can guarantee you won’t walk away feeling like you wasted your time.